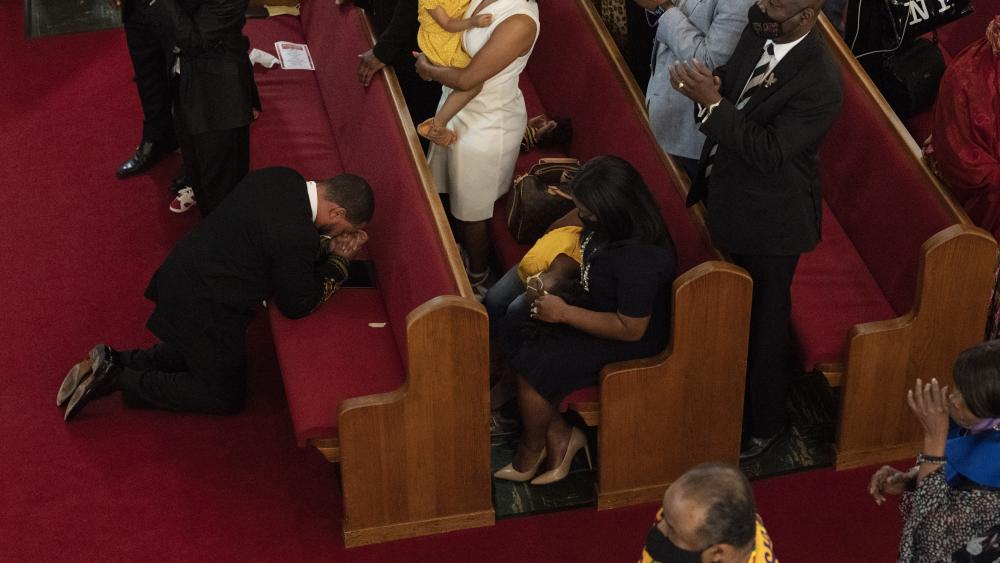 TULSA, Okla. (AP) — When white attackers destroyed the prosperous Black neighborhood of Greenwood 100 years ago this week, they bypassed the original sanctuary of the First Baptist Church of North Tulsa.

By the church’s own account, the attackers thought the brick veneer structure was too fine for a Black-owned church. The mob destroyed at least a half-dozen other churches while burning and leveling a 35-square-block neighborhood in one of the nation’s deadliest spasms of racist violence. Estimates of the death toll range from dozens to 300.

On Sunday, First Baptist's current sanctuary throbbed with a high-decibel service as six congregations gathered to mark the centennial of the massacre and to honor the persistence of the Black church tradition in Greenwood, as shown in the pulsing worship, call-and-response preaching and heavy emphasis on social justice.

Greenwood is “holy ground,” said the Rev. John Faison of Nashville, Tennessee, who preached at the service and is assistant to the bishop of social action for the Full Gospel Baptist Church Fellowship.

He said the centennial both honors the victims of the massacre and “celebrates the resilience and the resurgence of an amazing people of God.”

Similar commemorations took place at many houses of worship throughout Tulsa and across Oklahoma on Sunday, a day ahead of the official centennial dates. More civic activities are planned for Monday and Tuesday, including a candlelight vigil and a visit by President Joe Biden.

The commission that organized the centennial designated Sunday as Unity Faith Day and provided a suggested worship guide that each congregation could adapt, including scriptures, prayers and the singing of “Amazing Grace.”

Particularly at historically Black churches, speakers emphasized a call for financial reparations — both for the few centenarian survivors of the massacre and for the wider, economically struggling North Tulsa area, where the city’s Black population is largely concentrated.

“The main problem is that our nation is always trying to have reconciliation without doing justice,” Faison said. “Until repentance and repair are seen as inseparable, any attempt to reconcile will fail miserably.”

The Rev. Robert Turner, pastor of nearby Vernon African Methodist Episcopal Church, which also traces its roots to before the massacre, echoed that sentiment in an interview before his own church’s service.

“It’s not a tragedy that’s left in 1921. It’s a tragedy that continues to live each day that lacks justice,” said Turner, who protests weekly outside Tulsa City Hall, calling both for reparations and for a posthumous criminal investigation of the massacre’s perpetrators.

Some churches on Sunday recognized 13 still-active congregations that operated in Greenwood in 1921, including many that had to rebuild their destroyed sanctuaries. Lists of the 13, under the heading “Faith Still Standing,” are being distributed on posters and other merchandise.

“We don’t want it ever to happen again anywhere,” said the Rev. Donna Jackson, an organizer of the recognition.

Pastor Deron Spoo of First Baptist Church of Tulsa, a Southern Baptist church less than two miles from the similarly named North Tulsa church, told his congregation that the massacre has been “a scar” on the city.

The church has a prayer room with an exhibit on the massacre, accompanied by prayers against racism. It includes quotations from white pastors in 1921 who faulted the Black community rather than the white attackers for the devastation and declared racial inequality to be “divinely ordained.”

Spoo told congregants on Sunday: “While we don’t know what the pastor 100 years ago at First Baptist Tulsa said, I want to be very clear: Racism has no place in the life of a Jesus follower.”

Pastor Eric Costanzo grew up in Tulsa but didn’t learn of the massacre until attending seminary out of state. When he later saw an exhibit on the massacre at the Greenwood Cultural Center, he recognized its enormity. He later got involved with centennial planning, arranging for presentations at the church about the massacre and visits by church members to Greenwood.

In an interview, he said he hoped that the "bridge we created between our communities” remains active after the centennial to confront “a lot of the hard topics our city and culture faces.”

The Rev. Zenobia Mayo, a retired educator and an ordained minister in the Christian Church (Disciples of Christ), is also working to continue those conversations after the centennial. She said her family never used to talk about the massacre, even though her great-great-uncle, renowned surgeon A.C. Jackson, was among its most prominent victims.

Elders in the family sought to protect their children from the trauma of racist violence, she said. “They felt not talking about it was the way to deal with it.”

But now Mayo hopes to host discussions on racism at her home with mixed groups of white and Black guests.